After we originally published this post, an intrepid reader brought some arithmetic errors to our attention. We’ve corrected the numbers, and the outcomes remain unchanged.

If it looks too good to be true, it probably is. During a recent recruiting visit at a local trucking school, our director of recruiting noticed a poster advertising a Class A driving position that promised the driver would be home every night and be paid $1500 a week. A local job paying nearly twice what the average over-the-road driver makes! When she asked the class why they were still sitting there listening to her talk about the joys of the over-the-road trucking, the students replied, “We already called. The position’s been filled.”

How are expedite drivers paid?

In the expedite industry, most drivers are paid on a percentage of revenue. The most typical arrangement pays 60% to the equipment owner and 40% to the truck, which is split between the two team drivers. Sometimes the drivers are paid the 60% portion, and in turn the drivers cover fuel costs. In either case, roughly 80% of the load revenue is split between the drivers and the fleet owner, and the other 20%, plus the fuel service charge (FSC), is spent on fuel.

We take a different approach to compensating our over-the-road expedite teams, paying each driver a flat rate per mile plus ancillary pays. The ancillary pays are to compensate drivers for detention time, additional delivery stops, hand loads, etc., as required to meet customers’ needs. The rate per mile is determined by the driver’s endorsements and performance. For Class B straight truck drivers, this rate ranges from 40 cents per mile (CPM) for our newbies, to 50 CPM for our established veterans.

All of our drivers have the opportunity to get to the 50 CPM mark. The ones that do earn that rate deserve it. They’ve worked hard to get there by mastering our system and following our expertise. They’re able to stay on the road for extended periods of time (4-6 weeks or longer), they have their hazmat and tanker endorsements, they operate efficiently, and they’re problem solvers. Many of these drivers came to us with little or no over-the-road experience. They were willing and able to learn the way we run expedite, to do what we asked them to do, and are now reaping the rewards. And so are we! We make more money off our 50 CPM drivers than we do the 35 CPM guys because the higher-paid drivers are able to produce. I look forward to the day that all of our drivers are running at 50 CPM.

So, are you better off on a percentage split or a flat rate per mile? We recently had a driver resign because he felt we were ripping him off on our mileage pay system. I thought I better do some math and make sure that our driver pay rates are still the best in the expedite industry. For this example, let’s call the driver Danglers. I pulled the numbers that Danglers had produced since the first of the year. Now keep in mind, January is by far the slowest month in expedite trucking, but these are real numbers. This is the actual production of the truck over a 6-week period. Also, Danglers has a Class B CDL and drove a straight truck expediter. Keep that in mind if you want to compare these numbers to pulling a 53 foot van.

I put together a spreadsheet that lists the miles the truck ran, the revenue it generated, the fuel costs, and the drivers’ pay. Then I calculated what Danglers would have earned on a 40% revenue split, 60% revenue split less the actual fuel purchases, and the flat rate at 50 CPM. Here’s a chart that shows the total miles and earnings for each week. 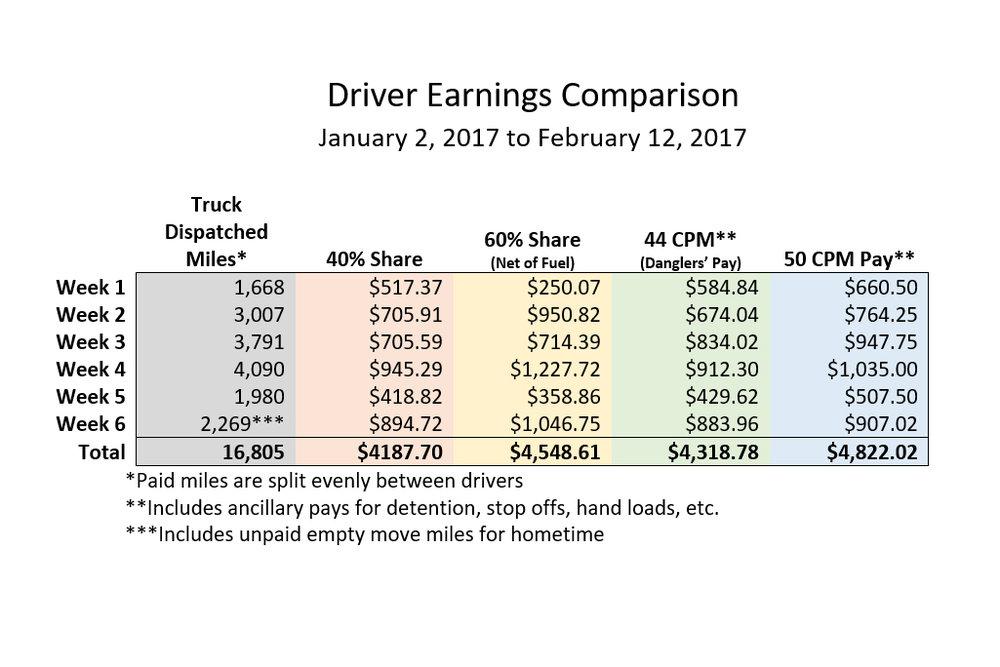 The green column shows Danglers’ actual pay for the period. Danglers was a mid-level driver for us with a rate of 44 CPM. Had he been willing to follow our system, and get his hazmat and tanker endorsements, he would have earned his way up to 50 CPM. The blue column shows what his earnings would have been at 50 CPM.

Which pay scale would you take?  Unlike the $1500 a week local driving job on the poster, these numbers are real. We have some of the best drivers on the road, and they’re earning 50 CPM with a class B license. They are ready, able, and willing to succeed, and so they do!

4 Replies to “The highest paid drivers”

Think you have what it takes to drive for Tempus Transport?